A Paperclip for a Painting

How much is the painting below worth?  How much should it cost? 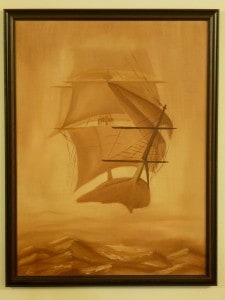 Value is one of those things that’s different for everyone.  What you value highly is very different from what I value.  That’s why the game “Bigger or Better” works.  If you’ve never heard of this game, here’s how it goes.

You get a group of friends together and break off into small teams, like 2 or 4 people.  Each team gets a small, relatively worthless object like a toothpick, a penny, or a paperclip.  Then, each team trades that object with neighbors, friends, or even strangers for something bigger or better.  They then make trade after trade over a set amount of time.  Whichever team  ends up with the biggest or the best object at the end wins.

But why would anyone be willing to trade you something more valuable for something so worthless as a paperclip?

Things we need are always more valuable than things we want.  If you’re in a MacGyver situation and you absolutely need a paperclip to get out of a deadly situation, then you’d be willing to trade anything you had for that paperclip.  Now, my wife didn’t find someone in dire need of a paperclip.  Chances are, they were willing to trade something marginally better than the paperclip just for the fun of getting to participate in their game.  That has value for some people.

From that point on, every object she got had value to someone.  Every trade she made was mutually beneficial.  She traded something that the other person wanted for something that they didn’t want quite as much, but which for her was bigger or better than what she was trading.  In the end, she got this painting, which was probably sitting around someone’s attic or in their art room after they decided that it was a failed art project.  Whatever the case, they didn’t have much value for it, but my wife did.  Now we have it framed and hanging on the wall in our living room, next to other paintings of ships and seascapes.

There’s a similar, but much more extreme story of a guy named Kyle MacDonald.  Back in 2005, Kyle decided he would start with one red paperclip and, over a series of trades, trade up to a house.  That was his goal.  It took him almost a year and 14 trades, but he did it.

His first trade was for a fish-shaped pen.  Now, a paperclip definitely isn’t worth as much as such a novel pen, right?  But to the girl who traded it, it absolutely was.  Because, you see, Kyle was a blogger who had written about his goal, and when he posted his ad for a paperclip, he explained what he was trying to do.  And one girl decided that she wanted to be a part of that, and it only cost her a fish-shaped pen.  And she even got a paperclip out of the deal.

Every trade that Kyle made was mutually beneficial.  The person he traded with got something they really valued for something that they valued less.  Yet each trade got Kyle closer to his final trade for a house in Kipling, Saskatchewan, Canada.

But how can one person be trading up while the person they’re trading with is also trading up?  That’s impossible?

It’s not, because the value that each of us places on stuff is different, based on our individual needs and wants.

I had to do this same thing for a class on negotiating that I took in business school.  I started with a single paperclip.  After 4 trades, I had a Bluetooth iPod dock.  My classmates ended up with all sorts of crazy things from chickens and a rooster to a voucher for a massage at a spa.  It was impressive to see the kinds of things that people could get just by recognizing the different value that people place on things.

Now think about how you can use this principle in your business.  There are so many applications from product pricing to negotiations.  Now that you can see how people value things differently, it makes sense that while some people may not find what you’re selling all that valuable, it’s probably going to be exactly what someone else is looking for.  If you know that, then you can start to think about what types of people might value what you have to offer.  This is the basis for strategic marketing.  It’s the basis for smart marketing.

You see, you don’t need to spend a fortune getting your website in front of everyone on the internet.  It’s never going to happen.  You don’t need to plaster your product all over every cable TV channel to get it seen.  In fact, with the internet it’s easier than ever to get your message right in front of the people that are most likely to want what you have to offer.

So be smart about how you advertise.

Figure out who the right audience is and then figure out how to get your message in front of them.  If what you’re good at is high quality graphic design, then don’t advertise to bloggers that are just getting started.  They probably don’t value the quality of your design work nearly enough to pay you what you’re really worth.  Instead, maybe look for established businesses who’ve been around a while but whose websites could use a major refresh.  There are tons of other groups of people who do value your high quality design work.  You can cut out a lot of work by focusing on the people who really value what you have.

So think about it, who wants what you have?  And who would be willing to pay you what you think it’s worth.

Once you find those people, you’ve found your real niche.