Last year, I came across the X Theme by Themeco, which is the #1 selling WordPress theme on Themeforest.  I have had terrible luck in the past buying one-off themes because the designers often dump a theme to make some sales, but do little in the way of support.  Not surprisingly, I was gun shy.  Although the theme looked impressive, I had tried enough themes that totally messed up my site to know to proceed with caution.

In fact, for years I’ve recommended to only purchase themes on the Genesis framework for more advanced users, or Woothemes for WordPress newbies.  That has all changed now.  I’m now changing all of my sites (yes, even the one you’re on right now is getting switched over) to X theme. You can see it in action on my Improve Photography website and also on my KnifeUp website, both of which get a large amount of traffic each day.

In short, X theme has significantly improved the profits on my niche site, loads quickly and without bugs even on my very high traffic authority site, and is now the only theme I’ll use going forward.

What is X Theme?

X Theme is “the ultimate WordPress theme” (Ack!  I hate marketing speak, but it’s true).  Inside the one theme are four “stacks” which are completely different designs for the site.  I’ve never seen any other theme do that.  And each stack is tremendously customizable.  This means you can really make this theme become suitable for just about any WordPress site without even touching code.

In addition to stacks, X theme sticks out for its incredible shortcodes.  X has shortcodes that quickly enable you to style your website to look fantastic without adding more plugins.  There are shortcodes for pricing tables, growth bars, animated counting numbers, columns, buttons, and lots more.  I was excited to see this functionality, but having made the mistake before of becoming reliant on a theme for these things and then later spending days to go fix the shortcodes when I changed themes, I was nervous at first about using them.  Fortunately, X provides a plugin for all these shortcodes, so if you ever end up changing themes down the road, it won’t break your site.

In its most recent release, Themeco added “extensions” to the theme.  These are basically WordPress plugins for a few random things that are available with the theme.  Personally, I wasn’t a fan of this move.  The plugins are pretty random additions and none of them seem terribly compelling to me.  I hope to see a more targeted, theme-centric release for the next version.  If the folks at Themeco are listening, PLEASE come talk to me if you’re looking for ideas!  I have some plans for the ultimate blogging theme that would fit this theme perfectly. 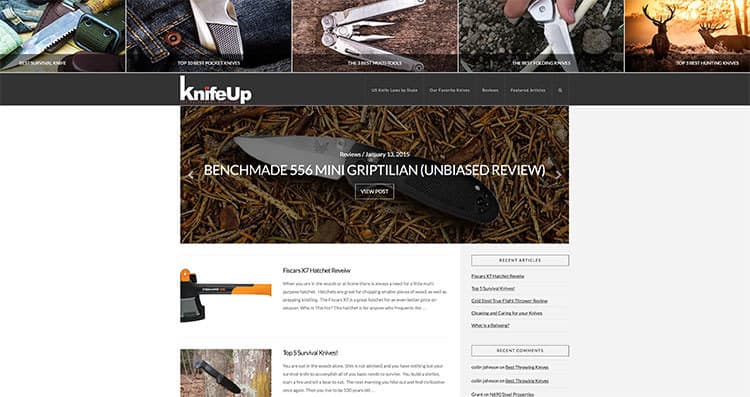 Both of the sites I’m running X theme on right now are using the Ethos stack.  This stack has the option of showing a carousel of posts in the header.  At first I wasn’t sure if I liked this design element, but it’s tough to argue with the results I’ve seen.  Case in point, the website I bought in December: Knifeup.com.

Knifeup is a pocket knife review website.  The problem with the site is that the majority of the traffic goes to pages of the site about knives, but not to the pages that have actual knife reviews with links to Amazon (the way the site is monetized).  I tried everything I knew to increase the conversion rate, but I couldn’t make any headway.  Then, I tried switching to X.  In the post carousel, I added links to our most popular knife reviews.

Immediately, the revenue from the site jumped up.  I was making about $1,600 per month from Amazon’s affiliate program before the switch, and now the site jumped up to $2,129.46 last month even though it was a shorter month by 3 days.  This month, it’s on track to do even better.  This, despite the fact that no other significant change was made on the site.  Oh, and total traffic saw a significant boost as well.  Now that is impressive!

The boost I’ve seen is directly attributable to one thing: the post carousel on the top of the theme, which helps me to show my most important content to visitors who would otherwise just be passers-by.

With a theme with so many features, I was quite concerned with the bugginess of the theme before purchase.  Running very large WordPress sites with lots of plugins and other things going on, I was concerned that I would encounter problems.

Fortunately, after using the theme for a few months on my sites, I have not encountered any bug that wasn’t fixed within 24 hours either by their (very) responsive support people, or by a theme update.

Speaking of support, I’ve been a happy customer.  Often I see support staff just trying to pass the buck off.  Their answer is usually “Disable all your plugins.  See!  The theme works!”  Often, plugins really are the cause of WordPress issues, but theme developers like to ignore that sometimes it’s the way the plugin interacts with the theme that causes the issue.  Disabling the theme would also fix the issue!  The plugin maker blames it on the theme and the theme maker blames it on the plugin.  I’ve loved to see real solutions from the support staff instead of passing the buck off.  A few times I’ve asked if something was possible on the theme, and they gave the the code to make it happen.  Awesome!

Given the features of X theme, my #1 pre-purchase concern was speed.  I’m proud of the fact that my sites always load at or slightly under 1 second, which is something that took me a lot of work to achieve.

After switching to X theme (previously from Genesis), my page speed stayed the same, despite the fact that I use many more and larger images on the X theme design.  That’s impressive!

Google Analytics page timing metric shows that page speed got significantly faster after the switch.  That’s great, but I’ve never found Google Analytics to be a reliable indicator of page speed, so take that with a grain of salt.

Even tested against Genesis, which is widely regarded as one of the fastest WordPress frameworks on the market, X theme performs equally well in terms of site speed.  In fact, I’d even say the theme does better because I’ve maintained similar site speeds while added much higher resolution and more images to the site as well.  That’s true even on my largest websites.

Bloat is another concern I had with this theme.  My worry was that with so many features, the amount of code on the site would slow down the site, cause conflicts with other plugins, and make the install process unwieldy.

Fortunately, this theme is built right.  Yes, there are a lot of features, but those features only load on the pages where they are used.

Yes, there are a lot of features, but the total theme install package is only 5.5mb (it’s really annoying when a theme is over 10mb and you have to manually install instead of using the WordPress installer).

Yes, there are a lot of features, but I haven’t seen any plugin conflicts with the set of about 20 plugins that I typically use on all my sites.

I’m not a developer so I can’t say much more about the quality of the code than that, but I can say from the user’s perspective–this appears to be a theme built right!

X Theme is an incredibly capable theme.  I hope Themeco doesn’t mess it up going forward.

Most of what I’d like to see in future releases of X are changes to the way we approach WordPress themes.  I’d love to see features that nobody else is doing, like the ability to show posts based on a user’s history on the site.  I’d love to see the ability to show ads for users not logged in, but no ads for logged-in users.  I’d love to see ways to customize the archive pages for each category so I can welcome users interested in those topics with my best resources instead of just a list of articles on the topic.  I’d love to see a way to show a banner on the homepage asking users on iPhone to go to the app store to subscribe to our podcast, but a different banner for the android people to go to the Google Play store.  Improving the user experience based on their behavior–beyond just listing posts randomly across a website–is the next great frontier in WordPress design.

I’d also love to see custom post types used to their fullest.  Since I’m a podcaster, a custom post type for audio content with a slick player would be a useful feature.  If I want to just publish a quick tweetable quote, it’d be awesome to have a small skinny bar come across for the quote.  Michael Hyatt did this with his theme, and it’s a very compelling feature for bloggers who use various types of media.  I’d also love to see a page on the site for my Youtube channel that shows videos off in a grid interface that allows me to customize which videos show up where.

The X Theme’s killer feature is dead-simple customization and beautiful design.  Extending the theme on that feature is the direction I hope Themeco takes–rather than just adding more built-in plugins their “extensions” release in X theme 3.0.

X Theme costs $63 and is available for download on Themeforest.  $63 is a reasonable price for such a powerful theme.  I’ve paid far more for themes with fewer features.

X Theme is my favorite WordPress theme, and the only theme I’m using on my sites as I re-design them.  X uses excellent designs, has killer shortcodes to make my blog posts look great, and works reliably.  Who could ask for anything more?