Today, I’m excited to tell you about a friend of mine.

This is a friend who I look up to in a lot of ways.  He has outstanding moral character, he’s one of the brightest guys I’ve ever met, and he truly has the entrepreneurial spirit.

My friend is Joseph Nielson and he started his business when he was 12 years old.

So now let me give you some background.

It was the spring of 2011 in a little town called Pembroke in the beautiful Appalachian mountains of Southwestern Virginia.  Pembroke doesn’t have much other than great people and beautiful views, but it does have one tourist attraction.  Pembroke is the home of the Cascades waterfall.  And while people don’t travel thousands of miles to see the Cascades, they do travel from up to hundreds of miles around to see them.

It was here that Joseph saw his opportunity.  You see, to get to the Cascades you have to leave the highway in Pembroke and drive a mile or so up a small road to a parking lot.  From there, you hike about two miles (3.2 km) up to the falls and then another two miles back down.  And Joseph’s family lived on that one, small road.  It’s the only way to the Cascades, and it’s the only way back.

Recognizing the traffic that Joseph’s little street would see (especially during the summer months), and knowing from experience how thirsty most people would be after a four-mile hike, Joseph realized that a simple lemonade stand in front of his house might actually be quite successful.

Now, when you think of a lemonade stand, you probably think of a little table with a hand-drawn sign and a pitcher of lemonade.  And you probably think of one or two kids sitting, anxiously waiting for their neighbors to stop by to buy some overpriced lemonade.  But Joseph approached the lemonade stand with a different mentality.  This wasn’t going to be a one-day venture.  It was going to be a business, and it was going to succeed.

So Joseph began, with a lemonade stand that looked a bit like the one I just described.  He offered lemonade, bottled water, granola bars, and Pop-Ice 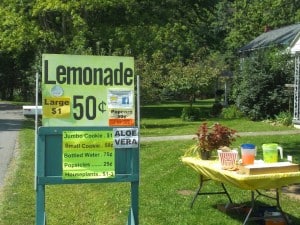 popsicles.  His setup included a folding table, a jar for money, and a handwritten sign on orange poster board because that’s what was available at the time.  But in his mind, he saw something bigger just around the corner.

In no time, Joseph’s younger sisters became interested in making a few dollars.  So he hired them, and paid them to run the stand while he took care of management and strategy.  He made 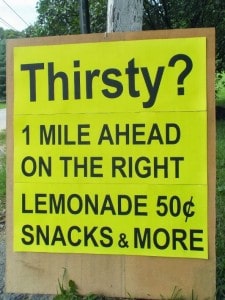 more signs and bigger signs to get people’s attention and get them thirsty well before they reached the stand.  He started selling more products, including chips and soda which they dropped due to low margins.  They added size options to their lemonade.  They now sell popcorn multiple flavors, cookies, and just about anything that a tired visitor might like after a four-mile hike.

Along the way, Joseph has worked with his younger siblings to improve their work skills.  He has actively worked on developing his own management skills.  He established a presence in social media using both Facebook and Google Plus. 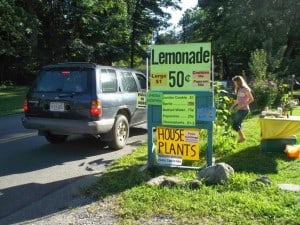 Today, he still sets up his stand on many Saturdays and some weekdays from May through October as well as on major holidays.  His younger siblings mostly run the stand so his time can be spent managing the stand and on other projects.

Again, I don’t write about this because my friend, Joseph, started the most lucrative business ever at the age of 12.  I happen to know that was never his goal.  I’m not suggesting that you should open a lemonade stand.

What I am suggesting is that if you want to start a business, if you want to earn some income, there are ways to do it.  Take an idea as simple as Joseph’s lemonade stand, and run with it.  Joseph was successful with the lemonade stand because he recognized that he had a unique opportunity on the street where he lived.  But nobody else on his street recognized that opportunity.  Only he did.

So what opportunities exist for you?  Where can you add value?  What can you offer that the people you have access to might want?

So my challenge to you is to be like Joseph.  Be an entrepreneur.  Start something.  Manage the risk.  If you’re nervous, start small.  But start.