Are You Taking Mental Shortcuts? Most Definitely…

Do you ever take mental shortcuts?

The answer is most definitely yes.  In fact, without mental shortcuts we wouldn’t really be able to live the way we do.

Think about it.  When you drive your car do you consciously process every action that you take?  Or do you go into a sort of auto pilot mode?  If you’re like most experienced drivers, then a lot of the steps you take while driving are mostly automatic.  In fact, have you ever driven somewhere where when you arrived you couldn’t even remember parts of the trip?

What about walking?  Do you think about every movement of every joint?  Do you consciously observe every obstacle in your path?  Or does your brain do a lot of the work in your subconscious and just move your body as needed.  And yet, that subconscious work usually gets us where we need to go without incident.

But how is it that our brain can do this?

Well, the simple answer is that we condition ourselves by repeatedly doing these things, to the point that our brain can do them without much conscious effort.

Similar things happen when we are forced to think about things.  We tend to not like doing mental exercise, much like many of us don’t like doing physical exercise.  It requires effort, and sometimes that effort is straining enough to be extremely uncomfortable. 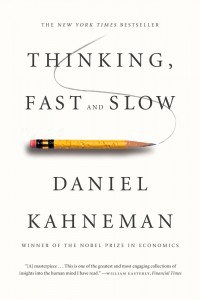 In his book Thinking Fast and Slow, Daniel Kahneman (who won a Nobel Prize in economics for some of the work he describes in this book) discusses in great detail how our minds take these mental shortcuts.  He calls these shortcuts heuristics, which he defines as “simple procedure[s] that help find adequate, though often imperfect, answers to difficult questions.”

So when our mind has a difficult question to answer, we tend to find a shortcut.  And we base that shortcut on our past experience answering similar questions.

Kahneman has a number of examples of questions that would be difficult to answer alongside the question that our brain chooses to answer instead.  Here are a few.

In each case, we take a question that would require some serious though and we simplify it so we can give an easy answer.

We take other mental shortcuts too.  Especially when it comes to numbers.  Numbers make a lot of people uncomfortable.  Here’s another of Kahneman’s examples.

If I asked you to multiply 17 x 24 you would immediately start thinking.  You might start working through the problem the way you were taught in school.  You might request a pencil and paper.  But you would also be confident before you even started that the answer was probably not 12,609 and it was probably not 123.  Neither of those seems to be in the right ballpark.  But you wouldn’t know for sure if the answer is 568 or not.

Now, if you didn’t have a paper and pencil, a calculator, or a computer available, then if you’re like most people you would probably give up on solving it for an exact answer.  And if someone were to tell you that they think the answer is 568, you might accept that.  But you might naturally try to simplify the problem.  You might figure that 17 is just a little below 20 and 24 is just a little above 20, so 17 x 24 is probably pretty close to 20 x 20, which is a much easier problem to solve.  So you might estimate that the answer is about 400.

And in this case you would be really close.  The answer is 408 in case you were curious.

Now, in this example, it’s not a matter of life or death.  Being a little off on your answer probably won’t cause your business to fail or anything like that.  But other situations where we use similar shortcuts might just affect your business or life.

Let me give you an example.

Let’s say that you manage a company and you’re in a meeting with your marketing manager.  You ask her to give you her estimate for how much of product z we expect to sell in the next quarter.  She hasn’t done her full projections yet so she tells you she doesn’t really know.  But you want an answer so rather than allow her to run her numbers and get back you to, you ask her for her best estimate right now.

But your marketing manager can’t answer that question right now, so instead she answers a different question.  A much simpler one.  In her mind she thinks, “last quarter we sold 1,000 and the quarter before that we sold about 950 so I think we might sell something like 1,025.”

Now, you have 1025 in your head.  So when she goes back to her desk and gets her input from sales and the market analysts, and comes up with a new number of 900, that’s going to seem completely unacceptable.  Even though her new number is based on the fact that your main competitor is launching their new model and they’ll probably get a higher market share for a couple months.  Still, you are anchored to that first number which you got because your marketing manager didn’t answer the question you were asking.

I’ve seen this situation happen so many times.  Managers want a number, so they ask for a best guess.  And that best guess is always based on a simpler question than the one really being asked.

Here’s another example.  Have you ever heard someone ask something like, “what are the odds the stock market’s going to drop this month?”  I’ve been asked that exact question.  The real answer is, I have no idea.  If I wanted to get to a reasonable answer, I might look at the months that the stock market has generated negative returns on average and study the reasons behind it and then look at current events to calculate the probability of negative returns in the current month.  But I can’t do that in my head.  I wouldn’t even really want to.  So I answer a simpler question.  I say something like, “probably about 20%”.  In reality, the question I’m answering is “are you worried about the stock market dropping right now?”  And my answer is, “no.”  So I pick a fairly arbitrary probability that says that I think it’s not likely but not impossible.

When it comes to probabilities, we use heuristics a lot and as a result we’re usually pretty far off.

One last example is in deciding whether or not to do a project for your business.  The project will have cost and it should generate income.  And whether or not it’s a good decision should be based, at least in part, on whether or not that income is enough to justify the cost.

So what if a manager comes to you and says, “should we do this project?”

Well, unless we have really run the numbers, and used realistic assumptions for cost and expected income, the truth is that we really don’t know.  So what happens is that if it’s a project we like, we’ll tend to underestimate the cost and overestimate the expected income.  This will lead us to say that we should go through with the project, all based on whether or not we like the idea.

So what should you do about it?

My hope here is that by being aware of these mental shortcuts that you are naturally inclined to take, you will notice some of these errors before you make them.

You can save time, money, and pain by being aware that your gut feel is probably not accurate.

In many cases it will be good enough, like when you’re driving, walking, or answering a silly question.  But when making important decisions, it’s worth taking a little time to work through the issue.

Even if you can’t get to an accurate answer, at least it will be better than the one your gut came up with.