How Understanding Statistics Will Help Your Business

You might be thinking, “who cares about statistics?  I’m just starting a business, I don’t need to know that stuff.”

In my business school program, the first course they teach is statistics.  Now I’m sure lots of students thought it was a weeder class or a filler class or something along those lines.  But within 6 months, most of them realized the value of what they learned.  It was, in fact, the first course of the program because we needed the tools they taught for most every other course.  We needed those tools to get through school, and more importantly we needed them to learn to become good business leaders and managers.

So today let me tell you why some knowledge of statistics will make you a better business owner, manager, and even employee.  And it all comes down to making decisions based on data.

Every time we make a decision, we weigh the available options in our mind and then choose the option that we think is best for us.  For most of the decisions you make in a day, this happens almost instantly, without much thought.  But for bigger, more important decisions, you usually think through the options consciously and deliberately.

You see, statistics is simply how we can organize and analyze data to make it useful for interpretation.  In short, it lets us take lots of data and understand what it means.

Without statistics, data is really confusing, and really impossible to interpret.  Even people who understand statistics can look at raw data and draw incorrect conclusions about what it means.  It’s only when we apply some statistics to that data that it really becomes valuable.

Let me give you an example.

Let’s say you have a website.  You want to track how many people are coming to your website, how long they’re staying, etc.  And let’s say that yesterday you had one hundred page views.  Now today, you check and you only have sixty-five.  Is that something to be concerned about?  Is it a downward trend?

The answer is probably no.  In fact, if you look at your traffic each day over a longer period of time, you’ll see lots of variability in the number of page views per day.  Some days will be high and some will be low.  This is called normal variation, and statistics gives us ways to measure it.

Take a look at the bell-curve graph here.  This is called the Normal Distribution and it shows a few basic statistics that we can calculate.  But what it 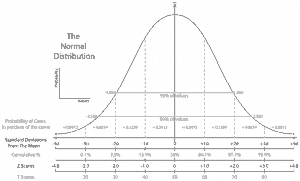 really represents is how data is often distributed around the mean or average.  What I mean by that is that there is always variability in data.  If you measured the same thing one hundred times the exact same way, you would probably not get the exact same result each time.

For example, let’s talk about weight.  When you weight yourself, the scale gives you a number.  But have you ever left the scale and then immediately returned to weigh yourself again?  If you have a pretty cheap scale like me, the result you got might have varied slightly from one weighing to the next.  Now imagine that you weigh yourself one hundred times throughout the day.  The weight would vary a lot.

Well, throughout the day you get dressed, you eat food, you drink water, and do any number of other things that will affect how the scale reads your weight.  Add to that the variability in the scale’s measurement and you’ll probably end up with several different numbers.  But if you graphed each number on any kind of frequency chart, it would have a shape similar to that bell curve.  That’s because most of the measurements would fall close to the your average weight with only a few falling far to the left (really low weights) and a few falling to the right (really high weights).  If you did this same measurement 100 times, the shape of the curve would look more pronounced.

So what exactly is this curve showing?

It’s a distribution that we see in many sets of data that tells us what that data is saying.

That center line on the graph is the mean or the average.  It’s the center point of the data.  In the weight example, it would be your average weight for the day.  Now, the width of the curve tells us how spread out the data is, or rather, how variable it is.  The wider the curve, the more variability there is in the data.

Well, let’s go back to that website example.  If you look at your website today and you only had sixty-five visitors but yesterday you had one hundred, do you need to start worrying?  The answer is, I don’t know.  Not from only two data points.  But let’s look at a few more days.  Let’s say that in the past 30 days, you average 75 visitors per day but the number of visitors is typically between 50 and 100.  Well, then a day with 65 visitors is nothing to worry about.  It’s perfectly normal for your website.

But if you don’t look at the numbers through this lens, then you’re likely to worry, and even make changes to your business when you don’t need to.  Without a basic understanding of statistics, you might be reacting to changes that are just normal variability.  And reacting too quickly to changes that aren’t really changes is one way that companies put themselves out of business.  They constantly chase the data without ever understanding what it’s telling them.

So the lesson here is learn some statistics.  You don’t need to be a statistician.  But having a working knowledge of statistics might just be what your business needs.

While you might not fail without it, you’ll drastically improve your odds of success with it.

“The Normal Distribution” by Heds 1 at English Wikipedia – Transferred from en.wikipedia to Commons by Abdull.. Licensed under Public Domain via Wikimedia Commons