What does it take to make a great ad?

We’re constantly bombarded with ads.  They’re on TV and on billboards we drive past every day.  They’re even all over our computers and phones now.  When you go to just about any website you’re going to see ads plastered all over the place.  But how effective are these ads for you? 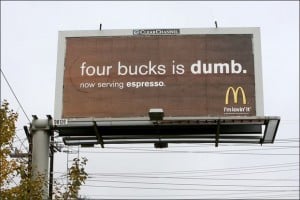 Think about the last ad you saw that caught your attention.  What was it for?  What did it want you to do?  Did you do it?

Back in 2008, McDonald’s posted a billboard in Seattle, the home of Starbucks.  They were advertising their espresso, and it caught a lot of people’s attention.

Every ad needs four key things to be effective.

You also need to hold people’s attention and get them interested in what you’re offering.  A great way to do this is to appeal to strong emotions.  Humor is a good one.  Fear is another.  There are lots of emotions that work.  Find one that’s appropriate for your audience and go with it.

You can also spark interest by making a comparison.  Compare what you’re offering to whatever else your customer might go buy instead.  There are lots of ways to get people interested.  The right way to do it depends a lot on what you want people to do after they see your ad.  Just think about why people should be interested in your product and find a good way to show it in your ad.

There’s quite a bit of overlap with interest here.  As you build people’s interest, you also instill in them a desire to do what you want them to.  But making someone want to do something is a whole level above simply getting them interested.  But the same tactics you use to spark interest can work here as well.  Using strong emotions is one great tactic.  Appealing to people’s reason is another.  Again, it depends what it is you want them to do.

You need to have a call to action.  This is where you tell people what it is you want them to do.  It can be as direct as “Go to www.mywebsite.com and subscribe to my email list” or as subtle as a web address in the bottom corner as long as the customer can tell what they’re supposed to do.

Bringing it all together

Let’s get back to the McDonald’s ad.

First of all, McDonald’s shocks you with the one word, “dumb”.  They’re calling someone dumb, and that gets your attention.  But who are they calling dumb?  Is it people who buy Starbucks coffee?  No, that’s not it.  Is it Starbucks?  Not really.  They’re calling the idea of four bucks for a cup of coffee dumb.  That’s right, they’re calling the general idea of expensive coffee dumb.  It’s the idea that’s dumb, not you.  So they’re shocking you with the word dumb, but without directly offending anyone.  This gets your attention.

Next, they spark your interest.  This ad makes a pointed attack at Starbucks, who is known for their fairly expensive coffee.  They don’t even have to use Starbucks colors or an image of their coffee cup or anything else to make you think about them when you see this ad.  Everyone, especially in Seattle, knows who they’re talking about.  So the ad manages to tell you in a matter of seconds that McDonald’s espresso is less expensive than Starbucks.

Then, they get you to want an espresso.  Did you notice the background color of the billboard?  If you drove past that dark, creamy brown color first thing in the morning you’d probably think to yourself, if only subconsciously, “I’d like a cup of coffee.”  Then, they put that subtle coffee cup ring around the word “four” just to seal the deal.  As you see that billboard, your subconscious is screaming, “I need coffee!”  Desire.  Obviously, this is only the case if you’re a coffee drinker, but that’s their audience so that’s okay.

So now McDonald’s got your attention with the shocking word “dumb,” they got you interested with the subtle yet obvious price comparison between them and Starbucks, then they got you wanting a coffee or an espresso with the images.  Now they just have to tell you what to do.

As an aside, think about how you know this is even McDonald’s…

It’s the big golden arches in the lower right corner.  They didn’t have to write their name.  They didn’t have to draw a diagram comparing McDonald’s prices to Starbucks prices.  They could be subtle, flash their logo, and you got the point.  In fact, that direct comparison that appeals directly to your reason would have been less effective.  Keep that in mind.

Now back to the call to action.  How to you know what to do now that you’re dying for a McDonald’s espresso?  In this case, the answer is obvious.  They don’t even have to write their address, because if you live in the neighborhood you already know exactly where the nearest McDonald’s is on your commute to work.  You can see the golden arches from a mile away.  Their brand recognition gives them this power.

If you don’t have the brand recognition that McDonald’s has (and I assume you don’t) you might have to spell things out a little more clearly in your ads.  The last thing you want to do is come up with a clever ad and gets people’s attention, but then leaves them wondering what it is you want them to do.

If you want people to buy your e-book on Amazon, then make that clear in your ad.

If you have a cosmetic product, don’t just have an ad with attractive models and a web address or store name.  Make sure people can tell what it is you’re trying to sell them.

Your ads need four things to be effective.  They need to draw Attention, they need to spark Interest, they need to instill Desire, and then they need to call to Action.  The Acronym is AIDA if that helps you remember.

If you can do these four things with your ad and then get it in front of the right people, it’ll work.

So make sure that you focus on AIDA with every ad.  Otherwise, you’re probably just wasting your money.