I’m sure you love math.  Right?

Arithmetic and even Algebra are really nice and clean.  1 + 1 = 2 and it always will.  Solving 3x + 1 = 4 for x will always give you the answer that x = 1.  But I doubt you’ve had to solve for x in a while if you’re like most people.  So you may have forgotten much of what you learned about math in school.

And that’s all great until numbers start showing up again.  But now, they’re not all clean like they were when we were kids.  They start to get messy when we start trying to use those numbers to help us make decisions about things that are happening in the real world.  Especially when we start adding in Greek letters…  The example I’ve been thinking about a lot lately is my weight…  You see, I can weigh myself one day, and then weigh myself 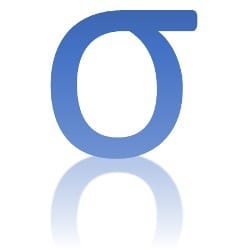 an hour later and the number changes.  So why has it changed?  Well, in that hour, maybe I ate.  I definitely burned a few calories.  Maybe I sweated a bit.  If I showered, maybe my skin is holding more moisture.  Really, there are easily hundreds of things that could have happened in that hour, each of which had an effect on my weight.

So you see, in the real world there isn’t just one variable x.  There aren’t even a hundred variables.  Most things that happen in the real world are affected by hundreds or even thousands of variables that we can’t keep track of.

So how do we deal with numbers in the real world?

The answer is statistics.  Statistics allow us to look at numbers as they vary and determine what really constitutes a trend, what data points are really abnormal, and when we should consider making a change.  Now, if you’re wondering why you should even bother with statistics, just read my post on the subject by clicking here.  Because now I’m going to take a dive just a little deeper and talk about variability.

Variability is at the core of all statistics.  We use statistics because of variability.  As you might imagine, variability is just the amount that data points differ between them.  So back to the weight example, variability is just how much my weight bounces around from one measurement to another.  For a website, we have lots of data that we can look at.  For most things, we look at summaries of the data rather than looking at each and every data point.  Let me give you an example.

For my websites, one of the numbers that I look at when I open my Google Analytics page, is the average session duration.  This tells me how long people are spending on my site.  But, it doesn’t tell me how long everyone spends on my site.  In fact, it’s probably that nobody spends exactly the amount of time that it says.  So what does that number represent?  Well, it’s an average, so it represents the duration that’s basically in the middle of all of the actual durations.  Average is a statistical measure that we use to represent groups of data, and we have to use it because the data varies.  Obviously people are all going to spend a slightly different amount of time on the site.

So what if I look at the average for one day, and then look at the average for the next day and I see that the time got shorter from yesterday to today?  Do I need to worry?  The answer is, probably not.  Not yet at least.  But with a little statistics, you can see if that difference is significant or not, because chances are it’s probably just due to the variability between the different users.

Can you start to see how this variability might be important?

Now start to think about other businesses where variability sneaks up.

Hint: it sneaks up in all businesses…

The reason for this is that there is lots of variability that affects how lines buildup.  Think about it, people don’t all arrive in evenly dispersed increments.  It’s not like people all show up at the bank 3 minute apart.  People arrive whenever they arrive, and there tends to be variability in the duration between arrivals.  What that means is that there are slow times at the bank where nobody is there, and then there are busy times when things are really busy.

So what about the doctor’s office where appointments are scheduled?  Well, there you would expect it to be better, but there is still a lot of variability in that system.  Some people arrive late, while others arrive early.  The doctor doesn’t spend the exact same amount of time with each patient, and they don’t necessarily know how long they’ll need when they schedule the appointment.  That, and the doctor wants to see as many patients as they can during the day, because the success of their business depends on that.  So the patient suffers in the waiting room.

In your business, there is certainly some area where understanding variability will help you improve.  If you have a website, tracking traffic volumes, sources, bounce rates, durations, and any number of other statistics will give you great insight into what is working and what isn’t.  In any business, understanding where your customers come from will help you understand what marketing is working and what isn’t.  In any manufacturing operation, there’s an enormous amount of data to track to help you reduce the variability of your product to improve its quality.

Variability is an inherent part of the real world.  It makes the math that we learned in school (and though we would never use again) seem simple and virtually useless.  But it’s not.  Statistical math isn’t terribly complicated.  And we have computers with software that can do all the heavy lifting for us.  What we need, though, is some understanding of how statistics works and how we can use it to make our business better.

So what do you think?

Feel free to respond below with your comments.